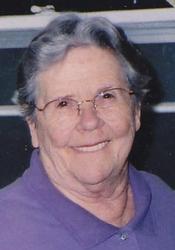 On May 16, 1943, Alice was united in marriage to Gerald Richard Phipps in Pleasant Hill, Missouri. He preceded her in death on September 26, 1980.

Alice was a homemaker. She loved camping with friends and family, and was an avid bird watcher.

Visitation was held prior to the service at the funeral.

Please click here to view the video tribute
To order memorial trees or send flowers to the family in memory of Alice Phipps, please visit our flower store.