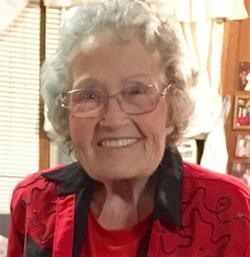 Edna Althea Schmoll, 93, of Pleasant Hill, was born, November 2, 1923, in Gunn City, Missouri, the daughter of Jackson and Ethel (Gulick) Rice. She departed this life, Monday, November 7, 2016, at her home surrounded with love and family.

Althea worked at Western Electric for 15 years before leaving to become a full time homemaker in the late 1960's. She enjoyed quilting, bird watching, gardening, and canning. She especially loved going to the Big Creek country show.

Memorial contributions are suggested to the Staley Mound Cemetery and may be sent in care of the funeral home.

Online condolences may be sent to the family at www.stanley-dickeyfuneralhome.com.

To order memorial trees or send flowers to the family in memory of Althea Schmoll, please visit our flower store.