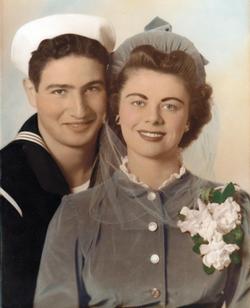 Anthony Nicholas "Tony" Santella, 92, of Pleasant Hill, formerly of Raytown, was born August 29, 1922, in Brooklyn, N.Y., the son of Nicholas and Rose (DiNicola) Santella. He departed this life at 5:00 p.m. Thursday, November 6, 2014, surrounded with love and family at the Pleasant Hill Health and Rehabilitation Center.

He proudly served his country in the U.S. Navy during WWII and the Korean War.

Tony retired as a supervisor from Western Electric in 1985 after 43 years of service. He was a long time member of Our Lady of Lourdes Catholic Church in Raytown before becoming housebound due to Parkinson's disease.

He lived his life devoted to his family.

Tony was also preceded in death by one brother, Michael Santella, in 2007.

The Recitation of the Rosary was held Monday evening followed by visitationat the funeral home. Visitation was also held at the church Tuesday morning.

The family encourages contributions to the Disabled American Veterans Charity. These may be sent in care of the funeral home.

To order memorial trees or send flowers to the family in memory of Anthony Santella, please visit our flower store.