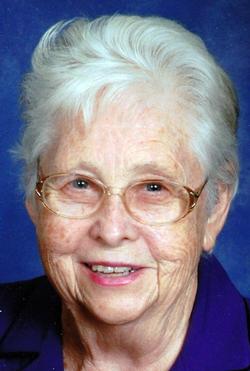 Arline attended Pluck grade school in California, Missouri and was a 1947 California High school graduate. Later she attended the Research Hospital School of Nursing graduating as a registered nurse.

On August 13, 1950, she was united in marriage to Henry Earl Funkhouser at the St. Paul Lutheran Church in California, Missouri.

Arline was employed as a Registered Nurse until her daughters were born. She then became a full time homemaker. She was a wonderful mother and grandmother. She was an active member of Our Savior Lutheran Church, Harrisonville. She was also actively involved with the Pleasant Hill Clothes Closet and served as a delivery driver for the Pleasant Hill Meals on Wheels. She enjoyed quilting, sewing, gardening, and mowing. She was especially fond of spending time with her grandchildren and great-grandchildren.

Arline was preceded in death by two brothers, Lex Volkart and Jim Volkart.

She is survived by her husband of 65 years, Henry of the home; three daughters, Becky (and Terry) Wilson and Annie (and Bill) Vaughn, both of Pleasant Hill, and Patty (and Mark) Diers, of Howard Lake, Minnesota; six grandchildren, Todd (and Nici) Wilson of Pleasant Hill, Adam (and Crystal) Vaughn of Lone Jack, Scott (and Jennifer) Vaughn of Pleasant Hill, Missouri, Julie Kinney of Pleasant Hill, Jeff (and Leisha) Diers, and Keith (and fiance Bridget Comee) Diers, both of Howard Lake, MN; nine great grandchildren (Taylor, Conway and Delilah Vaughn, Tyne and Truman Wilson, Tyler and Olivia Vaughn, Emma and Michael Kinney) ; two brothers, Rex (and Elaine) Volkart of California, Missouri and Alan (and Betty) Volkart of Ashland, Missouri; two sisters, Anita (and Joe) McDonald of Latham, Missouri, Judy Leithauser, of Russellville, Missouri; other relatives and many friends.

Visitation was held Friday evening at the funeral home, and one hour prior to the service at the church.

Memorial contributions are suggested to the Pleasant Hill Meals on Wheels or to Our Savior Lutheran Church and may be sent in care of the funeral home.

To order memorial trees or send flowers to the family in memory of Arline Funkhouser, please visit our flower store.