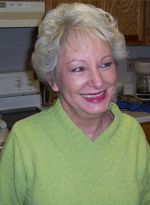 Cremation has been accorded. A celebration of life gathering was held Thursday, October 21, 2010, at the Loose Park in Kansas City.

Memorial contributions may be made to the Susan G. Komen Foundation and may be sent in care of the funeral home.

To order memorial trees or send flowers to the family in memory of Barbara Outen, please visit our flower store.