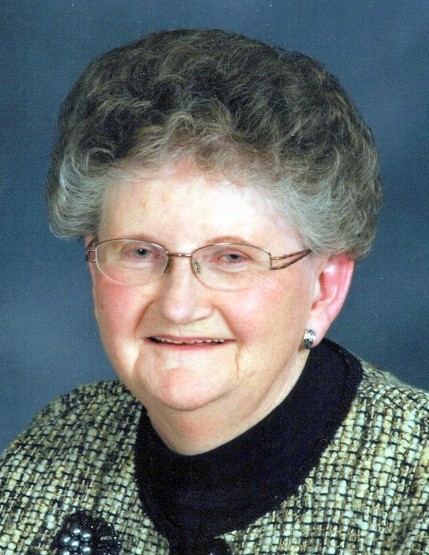 Barbara had been employed as a secretary for the Methodist Church in Burlington, as a bank teller in Burlington and Kansas City, and as a secretary for the E.R.C. Insurance Company. She was an active member of the Big Creek Baptist Church.    She enjoyed watching sports especially the KU Jayhawks, the Chiefs, and the Royals.  She also enjoyed gardening, quilting, and tending to her bird feeders.

Barbara was also preceded in death by her parents; granddaughter, Pamela Fay Schmidt; one brother, George Bennett; and her sister, Maude “Goldie” Carter.

She is survived by two sons, Mike (and Debby) Schmidt of Burlington, and Terry (and LaDonna) Schmidt of Kansas City; six stepsons, Junior (and Carol) Ross, Lloyd (and Pat) Ross, Bob (and Becky) Ross, Dennis (and Mary) Ross, all of Pleasant Hill, Glen Ross of St. Louis, Missouri, and Jim Ross of Lee’s Summit; three step-daughters, Linda (and D.A.) Kramer of Graff, Missouri, Nancy (and Jim) Hull, and Brenda (and Preston) Sanders, both of Pleasant Hill; numerous grandchildren, great grandchildren, and great-great grandchildren; other relatives and friends.

Graveside services were held later that afternoon at the Graceland Cemetery in Burlington, Kansas.

Memorial contributions are suggested to the Big Creek Baptist Church and may be sent in care of the funeral home.

To order memorial trees or send flowers to the family in memory of Barbara Ross, please visit our flower store.