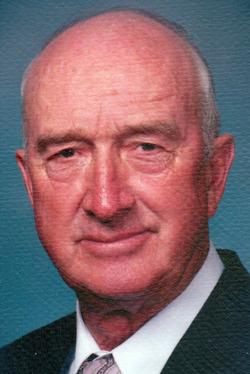 Bernie Clifford Vaughn, 87, of Harrisonville, formerly of Pleasant Hill, was born January 14, 1929, in Pleasant Hill, the son of Bernie Edwin and Lula Blanche (Walker) Vaughn. He departed this life at 2:41 p.m. on Saturday, February 13, 2016, at the Cass Regional Medical Center surrounded with love and family.

On April 9, 1950, he was united in marriage to Margaret Lavonna Maynard in Lee's Summit.

Bernie was employed as a Tool Setter for Lake City Army Ammunition Plant; prior to that he worked for the Big Creek Township. He enjoyed hunting, fishing and doing word finds. He also played in a local band that toured nursing homes in the area. He and Margaret worked with Pleasant Hill Meals on Wheels delivering meals for over 20 years. Bernie and Margaret spent 23 years wintering in Florida during retirement. He was a member of the Pleasant Hill First Christian Church and 50 year member of Jewel Lodge #480 A.F. and A.M., Pleasant Hill.

Bernie was preceded in death by his parents; and three brothers, Harry Vaughn, Harold Vaughn, and Leo Vaughn.

Visitation was held Wednesday, February 17, 2017, at the funeral home with Masonic services follwowing.

Memorial contributions are suggest to the Pleasant Hill First Christian Church and may be sent in care of the funeral home.

To order memorial trees or send flowers to the family in memory of Bernie Vaughn, please visit our flower store.