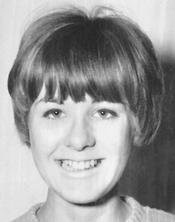 Bettie Anne Moreau, 63, of Lenexa, Kansas, formerly of Lee's Summit, was born Thursday, November 13, 1947 in Kansas City, Missouri, the daughter of Richard and Mary (Johnson) Holtzclaw. She departed this life Saturday, May 28, 2011 at the Greenwood Terrace in Lenexa, Kansas.

In the summer of 1987, Bettie was united in marriage to Alfred Napoleon Moreau in Kansas City, Missouri.

Bettie grew up in Lee's Summit and was a 1965 Lee's Summit High School graduate. She attend St. Luke's Nursing School and later went to work for American Life in Kansas City until failing health led her to early retirement. She was a member of the Unity Temple on the Plaza. Her hobbies included reading, quilting and playing cards; and she was a member of the Twin Oaks Bridge Club.

She is survived by her husband Fred of Lenexa; one sister Teresa (and Terry) Poindexter of Gower, Missouri; two brothers Harold (and Dee) Holtzclaw of Papillion, Nebraska, and Steven Holtzclaw of Knoxville, Tennessee, other relatives and friends.

Please click here to view the video tribute
To order memorial trees or send flowers to the family in memory of Bettie Moreau, please visit our flower store.