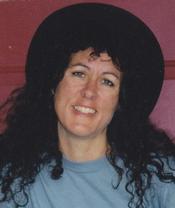 Betty Jean "Biz" Reynolds, 52, of Kingsville, Missouri, was born on Ground Hog's Day, February 2, 1959, in Erie, Pennsylvania, the daughter of Dale & Chris (Christoph) Fairchild. She departed this life at 9:15 a.m. on Sunday, October 2, 2011, the 28th anniversary of her marriage, at the Research Medical Center in Kansas City following a courageous two-year battle with ovarian cancer.

She graduated from the Blue Mountain Academy in Hamburg, Pennsylvania, before continuing her education at Southern Adventist University in Collegedale, Tennessee, where she graduated with an art major in 1982. During that time she spent the year of 1980 -1981 in Thailand as a student missionary for the Seventh-day Adventist Church.

In 1982 she moved to Missouri to work at the Shawnee Mission Medical Center. While employed there she met Harvey Reynolds, and on October 2, 1983, they were united in marriage in Erie. The couple moved to the family farm near Kingsville, where Harvey and his parents, Bob and Janice Reynolds, run the farming operation today.

Biz worked part-time at Powell Gardens for several years, where she was in charge of the Children's Gardens, and then for Kindercare for a brief period. She had many interests, including gardening, photography, writing, drawing and other art work. She also taught art and craft classes at Powell Gardens, as well as classes in baking pies, cinnamon rolls and other delicacies. An avid cyclist, she made three cross-state rides and several century rides. She kept in touch with many friends on Facebook and by e-mail. Church pianist for the Seventh-day Adventist Church in Kingsville for twenty-five years, she was also class teacher for the children and led out in many other youth activities.

Visitation was held from Wednesday evening at the funeral home.

Memorial contributions may be made to the American Cancer Society or the Kingsville Seventh-day Adventist Church and may be sent in care of the funeral home.

Please click here to view the video tribute
To order memorial trees or send flowers to the family in memory of Betty Reynolds, please visit our flower store.