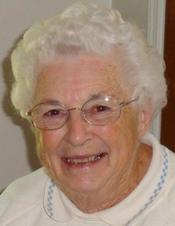 Billie Jean Haunschild, 84, of Belton, Missouri, formerly of Kansas City, Kansas, was born on Sunday, October 14, 1928, in Clinton, Missouri, the daughter of Hugh and Willia (Hayes) Gunn. She departed this life at 5:29 p.m., Thursday, March 28, 2013, at Carnegie Village, Belton, surrounded with love and family.

Billie Jean was a 1945 Pleasant Hill High School graduate and a 1949 University of Missouri graduate.

On November 5, 1948 she was united in marriage to Robert L. Haunschild in Columbia, Missouri. He preceded her in death in January 1996.

Billie Jean was employed as a bookkeeper for the Ore Radiator Service Company in Kansas City, Kansas. Foremost, she was a wonderful mother and grandmother. She loved gardening, flowers, fishing, and spending time with her family. She was a member of Our Savior Lutheran Church in Kansas City, Kansas, where she was a member of the Lutheran Women's Missionary League and an active volunteer.

She was also preceded in death by one son Robert Haunschild; one granddaughter Michelle Hayes; and one brother Frank Gunn.

Visitation was held Monday evening at the funeral home.

Please click here to view the video tribute
To order memorial trees or send flowers to the family in memory of Billie Haunschild, please visit our flower store.