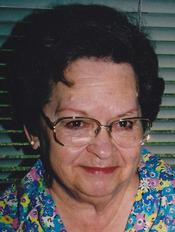 Mrs. Buddie Grace Anderson, 80, of Raytown, formerly of Pleasant Hill, was born Sunday, January 17, 1932 in Kansas City, Missouri, the daughter of Howard Bud and Elsie Irene (Taylor) Cain. She departed this life at 9:45 a.m. on Monday, November 5, 2012 at the Monterey Park Nursing Center in Independence.

Buddie co-owned and operated the Dairy Queen at 95th and Holmes in Kansas City for several years. She was a wonderful mother and homemaker. She was an excellent cook and loved to fix dinners for family; she also earned many ribbons for her pies at county fairs and contests. She was very outspoken, and often wrote letters to the editor of local papers, voicing her opinion on various topics. Most importantly she enjoyed her time with family and friends, especially the grandchildren.

Besides her parents, she was preceded in death by two brothers John Cain and James Cain, and one sister Nadine Trapnell.

She is survived by her son John (and Danelle) Rowe of Washougal, Washington; two daughters Melanie (and Ken) Horrell and Sherri (and Bill) Stewart, both of Blue Springs; four grandchildren, Sabrina (and Nicholas) Pacheco of Raytown, Brian (and Kelly) Horrell of Waukesha, Wisconsin, Kevin (and Ashley) Horrell of Grain Valley, and Chris Horrell of Blue Springs; three great grandchildren Sophia Grace, Edward, and Taylor; one sister Helen Brooks of Osceola, Arkansas; and her beloved sister-in-law Norma Cain of Raytown, Missouri; other relatives and many friends.

Buddie had a passion for the care of abandoned animals and her home was often filled with cats and dogs with no homes. The family encourages memorial contributions in her memory to be made to Wayside Waifs and sent in care of the funeral home

Please click here to view the video tribute
To order memorial trees or send flowers to the family in memory of Buddie Anderson, please visit our flower store.