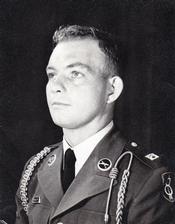 Cecil L. Golden, 78, formerly of Lee's Summit, Missouri, was born, Sunday, December 30, 1934, in Springfield, Missouri, the son of Leonard Edward and Opal Ethel (Manning) Golden. He departed this life at 11:29 p.m. on Monday, August 26, 2013, at his son's home in Branson, Missouri, surrounded with love and family.

Cecil was a United States Army Veteran; proudly serving in the Infantry and Airborne divisions.

Cecil had been employed as a welder for the Simon & Johnson Company in Kansas City retiring in 1986. He enjoyed fishing and building racecars in his spare time.

He was also preceded in death by one grandchild Daniel Fields.

Visitation was held Thursday evening, August 29, 2013, at the funeral home.

Memorial contributions are suggested to Hospice Compassus of Branson and may be sent in care of the funeral home.

To order memorial trees or send flowers to the family in memory of Cecil Golden, please visit our flower store.