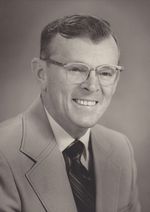 Charles (Charlie) Carswell, 87, of Greenwood, Missouri, was born August 30, 1923 in Kansas City to Mary Ester (Waller) and Charles Harry Carswell. He was an only child, and spent his early years on a farm in Archie, Missouri. He departed this life on Tuesday, August 31 at Cedar Valley Health Center in Raytown, Missouri.

Charlie was a US Army WWII veteran. He served in the Army from 1943 until 1946, receiving several decorations and citations.

He met Jean MacDonald while she was attending nursing school, and married her October 30, 1948 at the Community of Christ Stone Church congregation in Independence, MO. They were an unstoppable team with a partnership of love and respect. She preceded him in death on January 31, 2010.

His life was devoted to providing for his family and friends. He was happiest either figuring out how something might work, or talking about how it worked. He truly was a man of many, many skills and talents and was employed as a machinist, tool maker, in the auto trim business, as a graphic artist, conservation engineer and in "retirement" as a farmer.

He was also preceded in death by his parents.

Memorial contributions are suggested to the Pleasant Hill Community of Christ Church and may be sent in care of the funeral home.

Please click here to view the video tribute
To order memorial trees or send flowers to the family in memory of Charles Carswell, please visit our flower store.