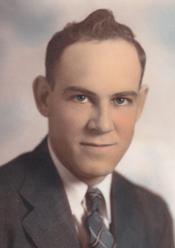 Chester Monroe "Ted" Hamilton, 98, of Pleasant Hill, was born on Thursday, September 25, 1913 in Ansley, Nebraska, the son of Wilmer Clay and Ann (Funston) Hamilton. He departed this life at 7:17 a.m. on Saturday, January 21, 2012 at the Pleasant Hill Health & Rehabilitation Center.

Chester was a 1931 graduate of Pleasant Hill High. He proudly served in the United States Navy during World War II.

On July 5, 1936, he was united in marriage to Myrtle Louise Clark in Harrisonville. They were married for over 75 years; she preceded him in death just four days before him on January 17.

Chester was employed as a Torque Inspector for the Ford Motor Company where he was a proud member of the UAW. He was a member of Independence American Legion Post #21 and a life member of the Pleasant Hill Veterans of Foreign Wars Post #3118.

Besides his parents and wife, he is preceded in death by three brothers Harry, Lester and Little Bill; and three sisters Blanche, Zell, and Dorothy.

Visitation was held one hour prior to the service at the funeral home on Tuesday.

Memorial contributions are suggested to Grace Hospice and may be sent in care of the funeral home.

To order memorial trees or send flowers to the family in memory of Chester Hamilton, please visit our flower store.