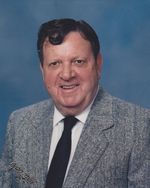 On March 30, 1956, Clifford was united in marriage to Lillian C. Howe in Aullville, Missouri. He was a member of the Big Creek Baptist Church in Pleasant Hill, and a life member of the Veterans of Foreign Wars Post #3118 in Pleasant Hill. He retired from Western Electric in 1981 and was a lifetime member of Telecom Pioneer. He enjoyed visits from his grandchildren, which incuded taking them fishing, playing endless hours of games and showereing them with unconditional love.

His remarkable life touched so many friends and relatives. He will be remembered as a loving and kind husband, father, grandfather and friend. His infectious laugh will always be remembered and missed.

Donations may be made to the Big Creek Baptist Church Building Fund and may be sent in care of the funeral home.

Please click here to view the video tribute
To order memorial trees or send flowers to the family in memory of Clifford Eslick, Sr, please visit our flower store.