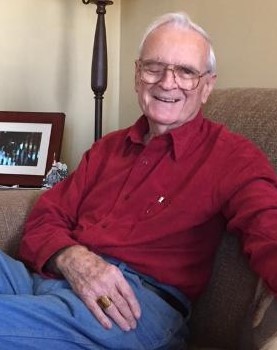 George T. “Corky” Long, 92, of Pleasant Hill, was born October 25, 1928, in Strasburg, the son of Ernest Dean and Gertrude Bell (Homan) Long.  He departed this life Sunday, May 2, 2021, at the Pleasant Hill Health and Rehabilitation Center.

Corky was employed as a Service Manager for several area car dealerships including Haines and Hodges Buick, Chuck Haines Buick, Wilmoth Buick, and Fleetwood Chevrolet.  Following retirement, he was a funeral assistant for the Stanley and Son Funeral Home for 17 years.  He was a member of the Pleasant Hill First Presbyterian Church and the Pleasant Hill Lions Club.  He enjoyed watching auto racing and was an Avid Indianapolis 500 fan attending every race from 1989 to 2005.

Corky was also preceded in death by his parents and his daughter, Catherine Roby.

Funeral services were held Wednesday, May 5, 2021 at the funeral home.  Reverend D. Kent Deubner officiated.  Interment was in the Pleasant Hill Cemetery.

Memorial contributions are suggested to Meals on Wheels and may be sent in care of the funeral home.

To order memorial trees or send flowers to the family in memory of Corky Long, please visit our flower store.