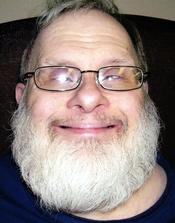 Darral Wayne Shissler, 54, of Belton, formerly of Lee's Summit, was born November 17, 1959, on the Kadena, Air Force Base in Okinawa, Japan, the son of James Clinton and Ruth Eleanor (Neidig) Shissler. He departed this life at 11:05 a.m. Monday, January 13, 2014, at the Beautiful Savior Lutheran Home, Belton.

He is survived by his parents James and Ruth of Belton formerly of Lee's Summit, Missouri; one brother James F. Shissler of Kansas City, Missouri; four sisters, Judith McLaughlin of Las Cruces, New Mexico, Nancy (and Jim) Taylor of Raymore, Missouri, Theresa (and Dellmus) Murrell of Jefferson City, Missouri, and Ruth (and Ron) Burri of Pleasant Hill, Missouri; several nieces and nephews; other relatives; and many friends.

Funeral services were held Friday, January 17, 2014, at the funeral home. Burial was in the Staley Mound Cemetery.

To order memorial trees or send flowers to the family in memory of Darral Shissler, please visit our flower store.