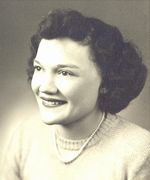 Delores Arlene "Dee" Carnes, 78, of Pleasant Hill, Missouri, was born Tuesday, April 21, 1931 in Wilson, Kansas, the daughter of Henry and Edna (Lille) Milberger. She departed this life at 9:14 p.m. on Saturday, January 16, 2010 at the Pleasant Hill Health & Rehabilitation Center.

On January 5, 1968 she was united in marriage to Lee Wayne Carnes in Kansas City, Missouri. He preceded her in death on February 29, 2008.

Dee was a Practical Nurse and later a Medical Transcriptionist for Mitchell, Stockton and Moore Urologists in the Kansas City.

She was an active member of the Ivy Leaf Chapter #215, Order of the Eastern Star in Pleasant Hill where she had served in many capacities including Secretary and Worthy Matron. She had also served as Worthy Matron in Garden City #340 OES, Grand Representative to Wisconsin 1985-1986; Grand Esther of the Grand Chapter of Missouri 1988-1989, District Deputy Grand Matron of the 34th District of the Grand Chapter of Missouri1996, and received her 25 year pin in 2003.

She was also a member of the Lord of Love Lutheran Church in Belton. Besides her parents and husband, she was preceded in death by her daughter Patricia Stewart and one brother Richard Milberger.

She is survived by her son and daughter-in-law Wayne and Ruth Stewart of Kansas City, Missouri; her step-daughter Susan Cambiano of Kansas City, Missouri; a brother Raymond Milberger and spouse Jan of Sacramento, California; one sister Arlene Mitchell of Prairie Village, Kansas; two Grandchildren Lille Stewart-Carnes and Andrew Stewart; three Step Grandchildren; other relatives and a host of friends.

Memorial contributions are suggested to the Lord of Lutheran Church in Belton, and may be sent in care of the funeral home.

Please click here to view the video tribute
To order memorial trees or send flowers to the family in memory of Delores Carnes, please visit our flower store.