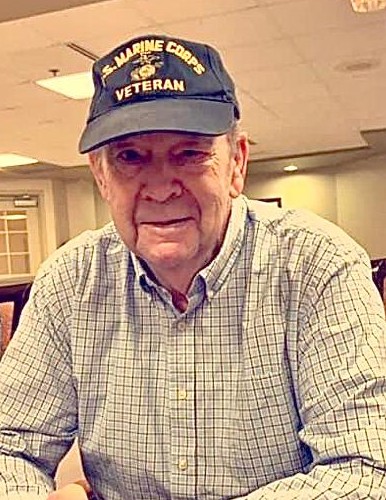 Charles Richard “Dick” Young, 79, of Kansas City, was born, February 26, 1941, in Oklahoma City, Oklahoma. He is the son of Alton “Jack” and Ota Addel (Loy) Young. On Wednesday, December 30, 2020 at The Groves in Independence; Charles Richard Young departed this life and became whole again.  He now resides with his Savior, Jesus Christ, in Heaven.

Dick was a 1959 Van Horn High School graduate in Independence.

He was a United States Marine Corps Veteran serving at Cherry Point, NC during the Vietnam Era.

On March 22, 1964, he was united in marriage to Karen Ann Beasley at Lone Jack Baptist Church.

Dick was employed as a Transmission Dispatcher for the Kansas City Power & Light Company beginning May 1963 and retiring in May 2000. He was a Deacon at Connection Point Church in Raytown, and a Deacon and Sunday School teacher at Sterling Acres Baptist Church in Kansas City. He enjoyed singing in the church choir, in the Heart of America Christmas Pageants, and with the Heart of America BarberShop Chorus. He also enjoyed working crossword puzzles, reading, playing baseball, and working on projects around the house and for others.

Dick was preceded in death by his parents; one brother, Warren A. Young; and one sister, Naomi R. Foster.

He is survived by his wife, Karen of Kansas City; three children, Leasa Young of Kansas City, Melinda (and Curt) Houdyshell of Raymore, and Todd (and Andrea) Young of Lake Winnebago; five grandchildren, Mya Houdyshell, Corban Houdyshell, Brackston Young, Kendall Young, and Christian Young; along with other relatives and family friends.

A Celebration of Life Gathering was held Sunday, January 10, 2021, at the Raymore Activity Center.  Military honors were conducted by the United States Marine Corps and V.F.W. Post #4409.

The family is asking that masks be worn and social distancing be maintained while in attendance at the gathering.

Memorial contributions are suggested to the Heart of America Chapter of the Alzheimer Association and may be sent in care of the funeral home.

To order memorial trees or send flowers to the family in memory of Dick Young, please visit our flower store.