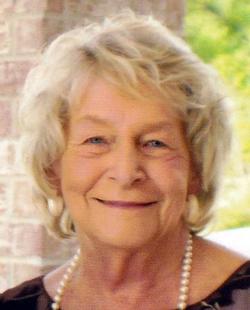 On June 9, 1957, she was united in marriage to Phillip E. Crotty in Kansas City.

Dolores was a homemaker. She also owned and operated the Crotty Tax service for over 30 years. She and Phil were instrumental in starting the Downtown Association and the annual Christmas Parade. She was a member of the Methodist Church. Her hobbies included crocheting, puzzles, and to sew. Every Christmas she would make hundreds of Christmas socks for her grandchildren to pass out to friends. She loved spending time with her family, especially her grandchildren and great grandchildren. She will be remembered for her huge Christmas dinners; although she was not feeling well she held her annual feast just this past Christmas. She was a strong woman.

Dolores was preceded in death by her parents; one grandson, Phillip Lee Slayden; and one sister, Peggy A. Johnson.

She is survived by her husband Phillip of the home; four children, Walter E. (and Lena) Crotty, Dawn (and Jake) Graham, Peggy (and Kelly) Hart, and Jimmy (and Kathy) Crotty, all of Pleasant Hill; 11 grandchildren; 15 great-great grandchildren; three sisters, Frances (and Kay) Meigs of Shawnee, Kansas, Carolyn (and Jerry) Wilson, of Deland, Florida, and Patty Shearer of Raytown, Missouri; other relatives and friends.

Visitation were held Wednesday, March 25, 2015, at the funeral home.

To order memorial trees or send flowers to the family in memory of Dolores Crotty, please visit our flower store.