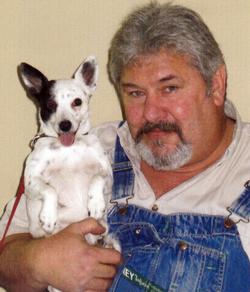 Donald Henley Land, 64, of Pleasant Hill, was born January 20, 1951, in Independence, Missouri, the son of John H. and Harriet (Henley) Land. He departed this life Wednesday, November 18, 2015, at his home after a courageous battle with cancer.

Don was a 1969 Lee's Summit High School graduate. An All-Conference performer in both football and track and field, Don attended Northwest Missouri State University on a football scholarship.

Don had been employed by HSC Industrial Coatings in Pleasant Hill. Prior to that he worked for Underwriters Insurance Corporation, as an Auto Recovery Specialist.

Don loved fast cars, guns, Civil War history, and old Western movies, especially those starring John Wayne and Gary Cooper. Don was an avid collector of unique antiques, which he purchased during his many travels throughout this nation. Don especially loved to have a good time with family and friends, and in his later years enjoyed the company of his Rat Terrier dog, "TWO BITS".

Single his entire life, Don still had a very large family... ..a family of close friends thoughout the country that enjoyed Don as much as he enjoyed them.

All who knew Don will remember him as "ONE-OF-A-KIND" who lived life his way, without compromise.

The world will be a less colorful place without Don !

Don was preceded in death by his parents.

Memorial contributions are suggested to the Pleasant Hill Cemetery and may be sent in care of the funeral home.

To order memorial trees or send flowers to the family in memory of Don Land, please visit our flower store.