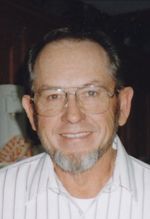 Donald Allen Dickerson, Jr., 71, of Pleasant Hill, Missouri, was born Saturday, July 15, 1939 at his grandparent's home in rural Pleasant Hill. He was the son of Donald A. and Linnie Iola (Small) Dickerson. He departed this life at 4:45 a.m. on Wednesday, September 1, 2010, at the Lee's Summit Medical Center.

He attended the Hickory Grove School as a child and was a 1957 Pleasant Hill High School graduate.

On June 1, 1961, he was united in marriage to Rita Kathleen Prewitt in Lee's Summit.

Donald was a gifted auto mechanic starting with Pennay Motors as a mechanic apprentice, later working for Howard-Willy Chevrolet-Oldsmobile and Dave Cross Motors in Lee's Summit.

Following his father's death he took over the family farming operation and opened his own auto shop next to his home. He owned and operated Don's Farm Shop until 1993, when he expanded his farming operation.

For most of his life he was an active member of Hickory Grove Baptist Church, where he was an ordained Deacon and served as Sunday School Superintendant for many years. In recent years he was a member of the Harrisonville Community Church.

He was an avid hunter and proud member of the National Rifle Association attaining lifetime membership status in 2008. He was a patriot and a charter founder of the NRA Second Amendment Task Force.

He is survived by his wife Rita of the home; one son Brent Dickerson and his wife Linda of Independence; one daughter Lisa Moore and her husband Steve of Harrisonville; grandchildren Joshua Dickerson, Lukas and Kayla Dickerson, Lacey Dickerson, Charlie, Mattie, and Josie Moore, Matt and Cydney Ryan, and Brooke Ryan; one sister Mary Wilmoth and her husband Perry of Pleasant Hill; other relatives and many friends.

Memorial contributions are suggested to the National Rifle Association or Kansas City Rescue Mission and may be sent in care of the funeral home.

Please click here to view the video tribute
To order memorial trees or send flowers to the family in memory of Donald Dickerson, please visit our flower store.