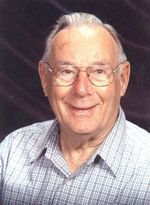 Donald Dean Teegarden, 80, of Pleasant Hill, Missouri, was born Friday, May 10, 1929 in Ray County, Missouri, the son of George Washington and Mabel Grace (Borgmeir) Teegarden. He departed this life Saturday, October 31, 2009 at his home. On October 26, 1952 Donald was united in marriage to Mary Jean Thomas in Kansas City, Missouri; they recently celebrated 57 years together.

Donald was a Millwright working for Allis Chalmers, Ruboid and later for General Motors. He also owned and operated the Big Creek Machine Shop; all while running their farm near Pleasant Hill. He was a member of the Strasburg Baptist Church, VFW Post #3118, and American Legion Post #53.

Besides his parents, he was preceded in death by his brother Jim Teegarden and his sister Hazel Bush.

Memorial contributions are suggested to the Strasburg Baptist Church Building Fund or Village Hospice and may be sent in care of the funeral home.

Please click here to view the video tribute
To order memorial trees or send flowers to the family in memory of Donald Teegarden, please visit our flower store.