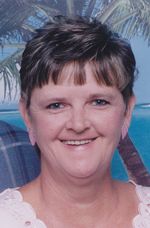 Donna Jean Linthicum, 59, of Pleasant Hill, Missouri, was born Saturday, February 3, 1951 in Viola, Arkansas, the daughter of J. R. and Margie C. (Haney) Roberts. She departed this life at 8:30 p.m. on Tuesday, March 30, 2010 at her home in Pleasant Hill surrounded by her family and friends.

On August 25, 1971, Donna was united in marriage to Gene Linthicum in East Lynne, Missouri.

She was a loving and caring wife, mother, grandmother, sister, and friend. Her absence will leave a hole in the hearts of all who knew her.

She was preceded in death by her father, one brother Wayne Roberts and one son Jayson Linthicum who died on March 6 of this year.

She is survived by her mother Margie Roberts of Raymore; her husband Gene of the home; one son Douglass and his wife Amanda of Schell City, Missouri; five grandchildren Rebaka, Trevor, Alyssa, Shawn, and Brandon; her brother Jeff Roberts of East Lynne; other relatives and friends.

Please click here to view the video tribute
To order memorial trees or send flowers to the family in memory of Donna Linthicum, please visit our flower store.