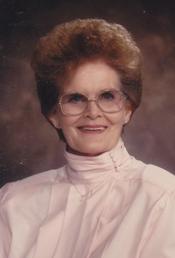 Mrs. Dorothy Roxana Redmon, 87, of Pleasant Hill, Missouri, was born Thursday, March 12, 1925 in Pittsburg, Kansas, the daughter of Clifford Paul and Olga Ruth (Gardenhire) Standlee. She departed this life at 6:50 p.m., on Saturday, July 28, 2012 her son and daughter-in-law's home in Harrisonville, Missouri, surrounded by her loving family.

Dorothy was employed as an Electronic Inspector for the Bendix/Allied Signal Corporation for over 25 years retiring in 1990.

Besides her parents, Dorothy was preceded in death by her first husband Willard Blasor and her 2nd husband Robert Redmon; one brother Clifford Standlee; and one sister Lois "Berniece" Chandler.

The family would like to express their sincerest thanks to all of the nurses and staff from John Knox Village Hospice for their compassion and care during this very difficult time.

Visitation was held Tuesday evening at the funeral home.

Memorial contributions are suggested to John Knox Village Hospice and may be sent in care of the funeral home.

Please click here to view the video tribute
To order memorial trees or send flowers to the family in memory of Dororthy Redmon, please visit our flower store.