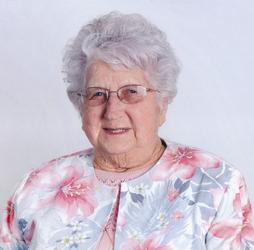 On October 26, 1939, she was united in marriage to Edgar Marion Hatton in Harrisonville. He preceded her in death on February 10, 1994 after 50 plus years of marriage.

Dorothy was a lifelong Pleasant Hill Resident living on the Hatton family farm until declining health required her to move into Foxwood Springs. She was a homemaker. She had also been employed for the King Louie Sewing factory for many years all the while assisting her husband on the farm until his death in 1994. She spent most of her Sunday's and holiday's preparing dinner for her family, playing cards, and watching her kids and grandkids playing softball, kickball, basketball, and riding horses on the farm. She genuinely loved babysitting young children and spending time with them. To this day she enjoyed staying in contact with them and watching them grow in to adults as they started their own families.

She also enjoyed gardening, going to the Casino, and sitting in the garage, sipping coffee with her family while watching the birds and enjoying the beauty of the country life. She especially loved watching Charles work the farm. In her early 20's Dorothy was saved in the Hickory Grove Baptist Church and has been a member there ever since.

She is survived by one son, Charles Hatton and wife Cheryl; one daughter, Punkie Neill and husband Don; one son-in-law, John Wilmoth; one daughter-in-law, Lenora Hatton; nine grandchildren; eight great-grandchildren; one great-great grandson; a host of other relatives and friends.

Visitation was held Wednesday, April 27, 2016, at the funeral home.

Memorial contributions are suggested to Crossroads Hospice or a charity of the donor's choice and may be sent in care of the funeral home.

To order memorial trees or send flowers to the family in memory of Dorothy Hatton, please visit our flower store.