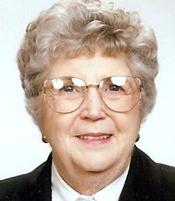 Dorothy Brown Lyder, 94, formerly of Pleasant Hill, Missouri and Paola, Kansas, departed this life on March 18, 2013, at Crown Care Center in Harrisonville, Missouri. She was born May 23, 1918, in Walker, Missouri the daughter of George and Ruth (Barker) Hardacre.

She was a 1936 graduate of Paola High School.

On January 29, 1939, she was united in marriage to Paul I. Brown in Independence, Missouri. They made their home in Pleasant Hill and were married for 37 years. He preceded her in death on December 24, 1977. In November, 1988, she married John Lyder in Pleasant Hill. They were married for 24 years and resided in Paola. He preceded her in death in August 2012.

Dorothy was a homemaker and was also employed at Unity Village and Western Electric in Lee's Summit, Missouri. In her earlier years she worked as a telephone operator in Paola and Pleasant Hill. She loved spending time with her children, grandchildren, and great grandchildren.

She was a member of the Pleasant Hill Community of Christ Church and attended Plum Creek Methodist Church, Paola.

Dorothy was preceded in death by her parents; one brother, Gene Hardacre, two sisters, LaVerne Murdock and Georgie Baugher; and a son-in-law, Don Dinges.

She is survived by one son, Phil Brown of Phoenix, Arizona; one daughter, Paula Dinges of Pleasant Hill; five grandchildren, Sheilah (and Jerry) Bates of Pleasant Hill; Lance and (and Tracy) Dinges of Harrisonville, Christy Brown-Rappoport of Cave Creek, Arizona, Paul (and Michelle) Brown of Anthem, Arizona, and Stacey Tucker; four great grandchildren, Geoff Bates and Zachary Bates, both of Pleasant Hill, Hannah Dinges of Harrisonville, and William Rappoport of Cave Creek; Dorothy also leaves behind four nieces; other relatives and friends.

Memorial contributions are suggested to Vitas Hospice and may be sent in care of the funeral home.

To order memorial trees or send flowers to the family in memory of Dorothy Lyder, please visit our flower store.