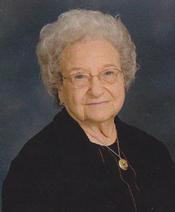 On March 6, 1943, Dorothy was united in marriage to Charles "Buck" Buxton in Olathe, Kansas and to this union two sons were born Charles and Michael. Mr. Buxton preceded her in death on December 29, 1967.

On September 19, 1969, she was united in marriage to Henry "H.D." Phillips in Kansas City, Missouri. He brought into their family two children Martin and Cheryl. Mr. Phillips preceded her in death on May 4, 2007.

Dorothy was employed at Avon then Lake City where she retired from after 25 years.

Besides her parents and her husbands, she was also preceded in death by one son, Charles E. Buxton on November 15, 1964; one brother Russell Johnson; and three sisters Catherine Faulkner, Mary Jackson, and Lola Witcher.

Memorial contributions are suggested to the Strasburg Baptist Church Benevolence Fund or John Knox Hospice and may be sent in care of the funeral home.

Please click here to view the video tribute
To order memorial trees or send flowers to the family in memory of Dorothy Phillips, please visit our flower store.