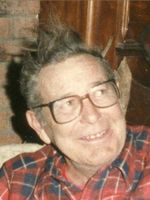 On October 1, 1970, Dean was united in marriage to Yula F. Trussel in Independence, Missouri.

Dean was a 1951 graduate of Sheridan High School where he enjoyed playing baseball for the school team. He was a Korean War Veteran earning the Korean Service, National Defense, and United Nation Service medals. On returning from Korea he went to work at Armco Steel where he was employed for over 33 years retiring in 1984. He was a member of the Forest Grove Baptist Church and the Veteran of Foreign Wars Post #9991 of Independence.

Dean was a caring man with a contagious smile that could warm any heart. He will be greatly missed by many family and friends.

Besides his parents, he is preceded in death by 1 brother Dennis Stone and 1 sister Doris Dowis and 1 great grandchild.

Please click here to view the video tribute
To order memorial trees or send flowers to the family in memory of Drexel Stone, please visit our flower store.