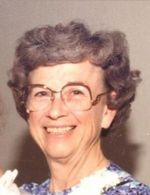 Edna Lucille Sudduth, 87, of Pleasant Hill, Missouri, was born Sunday, December 3, 1922 in Richmond, Kansas, the daughter of James M. and Mamie (Coleman) Miller. She departed this life Wednesday, January 20, 2010, surrounded by her family, at her son's home in Pleasant Hill.

On February 10, 1942, she was united in marriage to Dewey Derrelle Sudduth in Independence, Missouri. Within two weeks he was shipped out with the Army to fight in WWII and did not return for four years. He preceded her in death on January 27, 1993.

Lucille was a homemaker and mother until going to work for the Bendix Corporation in 1958, retiring in 1981.

She enjoyed knitting and crocheting, many family members and friends have samples of her talent.

She began playing the organ and piano for church services at the age of ten. She played for more than fifty weddings and many, many funerals. Until she went to work for Bendix she gave piano lessons.

She was a member of the Community of Christ Church in Pleasant Hill where she served in many capacities especially with the music. She enjoyed nothing better than spending time with her family, especially her grandkids and great-grandkids. In recent years she loved going to McDonalds every day having coffee and visiting with friends. McDonald's employees enjoyed all of the "Monkey Bread" she baked and brought to them often.

Besides her parents and husband, she was preceded in death by an infant son Charles Steven. Sudduth, one brother Art Miller, and her sister Elnora Ingram.

Memorial contributions are suggested to the Community of Christ Church or Crossroads Hospice and may be sent in care of the funeral home.

Please click here to view the video tribute
To order memorial trees or send flowers to the family in memory of E. Sudduth, please visit our flower store.