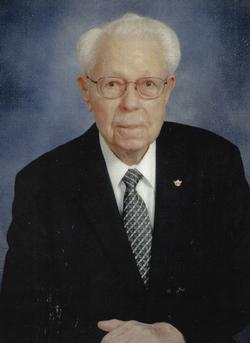 LIEUTENANT COLONEL EDMUND H. RUSSELL, 99, of Lenexa, Kansas, formerly of Pleasant Hill, Missouri, passed away Monday, August 22, 2016 at Lakeview Village in Lenexa. He is survived by three sons and their wives, Randy (and Sandra) of Dallas, Texas, Roger (and Janet) of Kansas City, Missouri, and Rex (and Wendie) of Wallingford, Pennsylvania; one daughter, Rita, of Atlanta, Georgia; seven grandchildren; four great-granddaughters. He is also survived by a sister, Dr. Valda Robinson (and Chase) of Tampa, Florida; two stepdaughters, Diana Foster of Prairie Village, Kansas, and Debbie (and David) Ronk of Hobe Sound, Florida; two step-grandchildren; and four step-great-grandchildren. He was preceded in death by his first wife, Betty, in 1990, his second wife, Doris, in 2008 and his sister, Maxine Hancock, in 2015.

Colonel Russell was born in Tiger Bay, Florida, on May 14, 1917, the son of Ira and Beulah Russell. He graduated from Brewster High School, Brewster, Florida, and was employed by the American Cyanamid Co. in Brewster in their Phosphate Division until he enlisted in the Army Air Corps in 1940. He survived the attack on Pearl Harbor in 1941 while serving at Wheeler Field. He went on to graduate from Bombardier School and then instructed bombardier students for sixteen months. He later completed Navigator School and served in India and China during WWII. He served briefly on the Florida Highway Patrol before being ordered back to active duty in the Army in 1946. He then served in the Philippines and Okinawa. He stayed active in the Air Force Reserves and flew worldwide missions including two trips to Vietnam. During his time in the Reserves he worked at Stahl's Specialty Company, Bendix, and Richards-Gebaur Air Force Base as a civilian employee while also operating his cattle and grain farm. He earned his Bachelor of Arts Degree in Business/Economics from Park College in 1976. After 36 years of military service he retired from the Air Force Reserves at Richards-Gebaur AFB. Upon retiring from his civilian job at Richards-Gebaur he worked as a substitute school teacher and for Gibson and Bowles Construction Co. before going into real estate sales.

Hismarriage to Betty R. Creekmore in February of 1944 lasted 46 years. He and Betty moved their family from Florida to the Pleasant Hill area in 1950. He and Doris Crowe were married in June of 1991. They enjoyed 17 years of retirement together in Raymore, Missouri and Lenexa.

He enjoyed fishing, woodworking and gardening. He will be dearly missed by his family and a multitude of friends. The family thanks the staff and community of Lakeview Village for their friendship and care during his years as a resident there.

In lieu of flowers, contributions may be made to the Lakeview Village Foundation or the Pleasant Hill United Methodist Church and may be sent in care of the funeral home.

To order memorial trees or send flowers to the family in memory of Edmund Russell, please visit our flower store.