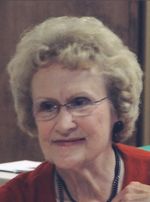 Eva Pauline Haralson, 85, of Holden, Missouri, was born Sunday, July 5, 1925 in Birch Tree, Missouri the daughter of Ervin and Alma (Huddleston) Young. She departed this life Thursday, August 12, 2010 at her home.

On July 25, 1944, Pauline was united in marriage to Elton James Haralson in Kansas City, Kansas.

Pauline was employed as an inspector for Bendix, Kansas City, Missouri for 25 years until her retirement in 1988. She was a member of the New Life Fellowship Baptist Church, Holden and the VFW Ladies Auxiliary.

Pauline loved her family, children, grandchildren and great-grandchildren. She immensely enjoyed quilting, dancing and spending time with her family and friends.

Besides her parents, she was preceded in death by an infant son, James Ray Haralson; two brothers, Edward Evans and William (Billy) Young.

Memorial contributions are suggested to the New Life Fellowship Baptist Church Memorial Fund and may be sent in care of the funeral home.

Please click here to view the video tribute
To order memorial trees or send flowers to the family in memory of Eva Haralson, please visit our flower store.