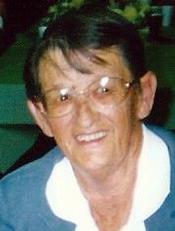 Fern was employed at Mobile Oil, Sears, was co-owner of the Strasburg General Store and was employed by Stock Auto Salvage before retiring in 1992. In her retirement Fern focused on attending her grand-children's soccer, football, basketball, volleyball games and dance recitals. She loved her Strasburg Elementary Eagles and attended as many basketball games and school functions as possible. Fern enjoyed mowing her yard and the Strasburg Cemetery, fishing, playing cards and any activity with family and friends.

She was also preceded in death by a grand-daughter, Emily Graves, her twin sister Faye Comer and one brother James D. Hackett.

She is survived by, two sons Rod (and Pam) Graves, and Roger (and Kathy) Graves both of Lee's Summit; four grandchildren Brad Graves of Kansas City, Lindsey Graves of Ames, Iowa, Eric Graves and Jason Graves of Lee's Summit; one brother Granville Hackett of Strasburg; one sister Allie Jo Ayres of Estes Park, Colorado; several nieces and nephews; other relatives; and many friends. Fern will be remembered as a mother, aunt and grandmother to many.

Visitation was held Wednesday evening at the funeral home.

Memorial contributions are suggested to Harden Hospice, Strasburg Cemetery, or the Strasburg Union Church and may be sent in care of the funeral home.

To order memorial trees or send flowers to the family in memory of Fern Graves, please visit our flower store.