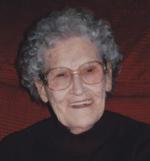 Frances was a homemaker. She was a member of Kellogg Baptist Church in Pleasant Hill where she had served as the nursery attendant for many years.

Memorial contributions are suggested to Kansas City Hospice House and may be sent in care of the funeral home.

To order memorial trees or send flowers to the family in memory of Frances Rowland, please visit our flower store.