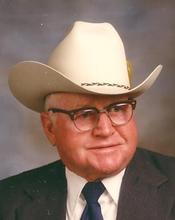 Charles Franklin "Frank" Dobson, of Harrisonville, Missouri was born September 2, 1919 near Coleman, Missouri the son of Charles Franklin and Nellie Leona (Shackelford) Dobson. He departed this life on Friday, July 13, 2012 at the Pleasant Hill Health and Rehabilitation Center, Pleasant Hill, Missouri at the age of 92 years, 10 months and 11 days.

On December 25, 1937, Frank was united in marriage to Ina Christine Thompson in Harrisonville, Missouri.

Besides his parents, he was preceded in death by his wife, Christine Dobson on January 31, 2009; a son, Buddie Dobson on November 12, 2011; a brother, Carl Allen Dobson and 2 sisters, Margaret Bailey and Florence Sherman.

Funeral services were held Tuesday, July 17, 2012 at the Dickey Funeral Home, Harrisonville, Missouri with burial in the Orient Cemetery, Harrisonville.

Family will receive friends one hour prior at the at the funeral home.

Family suggests memorial contributions may be made to the First Baptist Church Memorial Fund, Harrisonville.

To order memorial trees or send flowers to the family in memory of Frank Dobson, please visit our flower store.