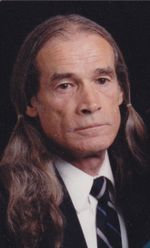 Gary Lee Egelston, 70, of Pleasant Hill, Missouri, was born Wednesday, February 14, 1940 in Greenwood, Missouri, the son of LaVern Omar and Roberta (Cox) Egelston. He departed this life at 6:49 p.m. on Tuesday, August 31, 2010 at the Cass Medical Center in Harrisonville.

He was a United States Navy Veteran serving in Vietnam.

On December 17, 1966, Gary was united in marriage to Gwendolyn Kay Stevens in Lee's Summit.

Following his time in the service he went to work for the Walt Disney Corporation where he worked as a background designer and he also drew cartoons in his spare time including Lil' Abner and Straight Arrow. Later he was employed as a Draftsman for Lucent Technologies, retiring in 1994. He was a proud member of the Missouri Free Trappers.

He loved racing sled dogs, fighting roosters, collecting coins/comics, and anything related to Mountain Men and American Indians. He was an avid fan and collector of memorabilia of the Knight Rider and Air Wolf television series and also raised Mustangs, Paint, & Quarter Horses.

He was preceded in death by his father and two brothers Larry Egelston and Richard Egelston.

He is survived by his mother Roberta of Lee's Summit; his wife Gwendolyn of the home; three children Allen Egelston and his wife Tina of Thousand Oaks, California, Ginger Moorhead and her husband Jason of Raytown, Missouri, and Aaron Egelston and his wife Natausha of Kansas City, Missouri; five grandchildren Alexander, Adam, Dwight, Lukas and Marcus; several nieces and nephews; other relatives, and friends.

Memorial contributions are suggested to the Cass County Regional Hospital and may be sent in care of the funeral home.

Please click here to view the video tribute
To order memorial trees or send flowers to the family in memory of Gary Egelston, please visit our flower store.