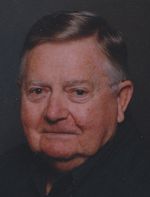 Gene was a well known stone mason. He built a large majority of the retaining and sea walls at Lake Lotawana. He enjoyed hunting, reading and collecting books. He loved working in the garden, watching and feeding the birds, and telling stories. He loved to listen while his foot was tapping to the music that his family members played. He accepted the Lord on October 18th, 1949 and was a member of the 1st Baptist Church of Blue Springs, MO.

He will be missed by all who knew him.

He was preceded in death by his wife, Nellie, on May 27th, 2006; his four brothers, Raymond, Harold, Kenneth and Kenion; one sister, Ona Fay Brickey; two grandsons; and one great grandson.

Please click here to view the video tribute
To order memorial trees or send flowers to the family in memory of Gene Brown, please visit our flower store.