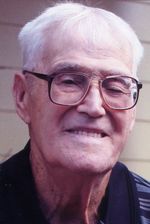 George Edward Bowman, 88, of Pleasant Hill, Missouri, was born Friday, August 4, 1922 in Carroll County, Arkansas, near Eureka Springs, the son of Henry Edward and Flossie Mae (Knox) Bowman. He departed this life at 11:05 a.m. on Thursday, August 19, 2010 at his home surrounded by his family.

At the age of 15, he lied about his age to join the CCC. After serving there, he enlisted in the Army where he served from 1942 until 1945. While in the Army he landed on Omaha Beach, June 6, 1944, on D-Day. He also participated in the Battle of the Bulge and crossed Remagen Bridge.

On July 7, 1945 upon returning to Pleasant Hill, George was united in marriage to the love of his life Jennie C. Yadon in Harrisonville, Missouri, and they remained in the area the rest of his life.

He worked as a farmer and a factory worker, eventually settling into carpentry. Many people in the area still live in homes built by George. He also helped build much of the First Baptist Church in Pleasant Hill, where he has remained a member and deacon emeritus.

He was a former member of the Pleasant Hill Optimist Club, Bit & Spur Saddle Club, Quarterback Club (where he ran the chain gang at the high school football games for many years), the Boy Scouts and the Tribe of Mic-O-Say.

He was well known for his hard work and generosity. He had a love for babies and was known as the "Candy Man" to all the children as he always had a pocket full of candy.

He was preceded in death by his parents, infant twin sisters and a son-in-law, Chris Ford.

Memorial contributions are suggested to the Building Fund at First Baptist Church and may be sent in care of the funeral home.

Please click here to view the video tribute
To order memorial trees or send flowers to the family in memory of George Bowman, please visit our flower store.