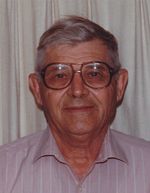 Following the bombing of Pearl Harbor he was sent to Hawaii as a civilian naval employee where he helped construct and install a radar tower on the side of a volcano on the island of Oahu. On his return he went to work for Pratt and Whitney as vertical lathe operator, later he went to work for Bendix & Westinghouse, then to Chevrolet as a portable tool repairman. He was a member of St. Bridget Catholic Church.

Besides his wife, he was preceded in death by a brother Carl H. Ruth and a sister Mary G. Whitte.

He is survived by two sons and daughter-in-laws Lance and Linda Ruth, and William and Patty Ruth, all of Greenwood; 10 Grandchildren; 15 Great Grandchildren; a sister Betty J. Williams of Malakoff, Texas; other relatives and friends.

Memorial contributions are suggested to the St. Bridget Catholic Church building fund and may be sent in care of the funeral home.

Please click here to view the video tribute
To order memorial trees or send flowers to the family in memory of George Ruth, please visit our flower store.