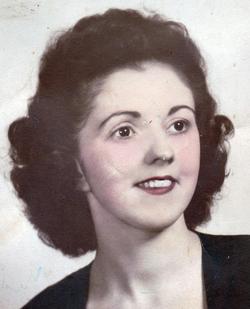 Georgia Ann Palmer, 91, of Kansas City, was born January 8, 1923, in David City, Nebraska the daughter of Vincent and Julia (Pekarek) Vanis. She passed away Sunday, February 23, 2014, at the St. Joseph Medical Center, Kansas City, surrounded with love and family.

Upon her mother's death, Georgia became "mother" to her five younger siblings at the age of 13. Her baby brother was two years old at the time. She learned at a young age to become an expert baker of bread and Kolaches.

She proudly worked at Luzier Cosmetics for 42 years until her retirement at the age of 68. She was then delighted to volunteer at St. Luke's Medical Center for the next decade. She was a member of Visitation Parish. Georgia has been a treasured resident of Little Sisters of the Poor for the past seven years. Her favorite pastimes included crocheting, needlework, and sewing. Her amazing stitches were precise and a step above the rest.

To order memorial trees or send flowers to the family in memory of Georgia Palmer, please visit our flower store.