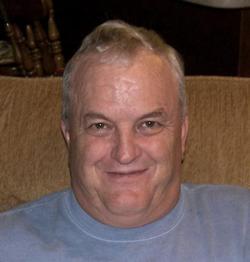 Gerald Eugene Tippie, 71, of Pleasant Hill, was born October 29, 1942, in Butler, Missouri, the son of Anson Roy and Mary Ethel (Marsh) Tippie. He departed this life at 4:50 p.m. Wednesday, October 15, 2014, at the Kansas City Hospice House surrounded with love and family.

On November 8, 1969, he was united in marriage to Shirley Ann Rogers in Independence, Missouri.

Gerald was employed in maintenance with Honeywell in Kansas City retiring in 2004. Prior to Honeywell he worked for the Alyn Distributing Company and Green Lamp Company fixing sewing machines. He also did Uniloader work for friends and family. He liked all sports, and enjoyed watching Chiefs football, and he was an avid Dale Earnhart Jr. Nascar fan. He loved to travel and had visited all but four of states. He liked baseball and a pickup game of basketball as well as photography. Most important to Gerald was family, especially his grandchildren. He attended the Pleasant Hill First Christian Church.

Gerald was preceded in death by his parents; two brothers LaVaughn Tippie and Keith Tippie; and one sister Margie Swarnes.

He is survived by his wife Shirley of the home; two sons, Jason (and Charlotte) Tippie of Prairie Village, Kansas, and Jon (and Sarah) Tippie of Pleasant Hill; four grandchildren, Anson and Christian of Prairie Village and Addie and Tyson of Pleasant Hill; one brother Billie Ray Tippie of Rich Hill; three foreign exchange students with whom he and Shirley opened their home to, Joel Fares of Puerto Plata, Dominican Republic, Ville Liukka of Helsinki, Finland, and Marilina DeCillis of Lavello, Italy; other relatives and many friends.

The family would like to extend a heartfelt thanks to the doctors and staff at the Kansas City Hospice House for their care and compassion shown to Gerald and to the family during his stay at the hospice house.

Cremation has been accorded. A memorial service was held Saturday, October 25, 2014, at Stanley-Dickey Funeral Home. Reverend D. Kent Deubner of the Pleasant Hill First Christian Church officiated. Inurnment will be in the Pleasant Hill Cemetery at a later date.

In lieu of flowers, memorial contributions are suggested to the Kansas City Hospice House and may be sent in care of the funeral home.

To order memorial trees or send flowers to the family in memory of Gerald Tippie, please visit our flower store.