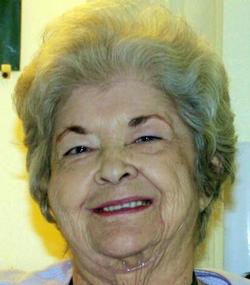 She was a 1952 Westport High School graduate and a 1987 Longview Community College graduate.

Gerry was employed as a Switchboard Operator for the Prime Health Wornall Care Center in Kansas City, Missouri for 22 years. She had also worked for both the Spofford Home, and Symington Elementary School, Kansas City, as a Teacher's Aide, and as a lunch cashier for the Hickman Mills Consolidated School District #1 and at Symington Elementary School. Gerry was also a part-time real estate agent.

She was involved in the extracurricular activities of piano and dance as a child and adolescent and became a dance instructor at Margaret Lyons, and toured with a dance group performing throughout the Midwest. She was also a member of the prestigious Westport High School A Capella Choir.

She was preceded in death by one brother, Richard Dole of Lakewood, California, and her parents, Gerald and Marie Dole.

She is survived by three children, Michael (and Lynn) Boyer of Blue Springs, Pamela (Christian) Marn of Kansas City, and Maria Christian of Huntington Beach, California; three grandchildren, Matthew (and Alison), Mark, and Shannon Boyer; and two great grandchildren, Aiden and Mikah; other relatives and friends.

Memorial contributions in Gerry's memory may be made to the Alzheimer's Association and may be sent in care of the funeral home.

To order memorial trees or send flowers to the family in memory of Geraldine Christian, please visit our flower store.