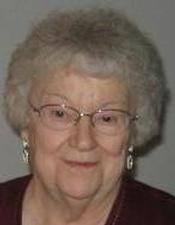 Geraldine "Gerry" Williamson Ford, 79, of Pleasant Hill, Missouri, our sweet, loving Mother and Momo, was born Friday, September 16, 1932 in Pittsburg, Kansas, the daughter of Roy and Rosa (Hamilton) Williamson. She went to be with her Lord at 7:10 a.m. on Wednesday, September 12, 2012 at the John Knox Village Care Center, Lee's Summit, surrounded with love and family.

At the age of 13, she met the love of her life and best friend Raymond L. "Tag" Ford. She later married him on December 30, 1950. They were blessed with two sons Chris Alan Ford and Clayton Charles Ford.

In 1960, she and Raymond moved to Pleasant Hill, where they resided and raised their children. She was an active member of the First Baptist Church. For many years she taught the Shining Light Sunday School class.

She worked for the IRS, in Kansas City, Missouri for 26 years where she made many friends. She retired from the IRS in 1992.

Gerry was always filled with lots of love and compassion and she had a spirit that was always extending her love and her home to people. She took great love and pride in spending time with her family, cooking and praising Jesus.

Besides her parents, she was preceded in death by her first born son Chris on May 15, 2009; and one sister Rosalie Coulter.

Cremation has been accorded. Memorial services were held Sunday, September, 16, 2012, at the First Baptist Church, Pleasant Hill. Reverend Wyatt Shanks officiated. Inurnment will be in the Pleasant Hill Cemetery at a later date.

Visitation was held prior to the service at the church. Memorial contributions are suggested to the American Cancer Society and may be sent in care of the funeral home.

Please click here to view the video tribute
To order memorial trees or send flowers to the family in memory of Geraldine Ford, please visit our flower store.