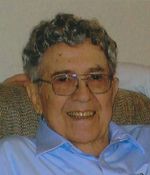 He was a 1945 graduate of Cross Timbers High School. On September 22, 1946 he was united in marriage to his high school sweetheart, June E. Ingram in Cross Timbers.

They lived on a farm for a few years after they were married then moved to Kansas City, Missouri, where he built their home, which they lived in for over 36 years.

He went to work at the Leeds General Motors Plant in Kansas City, Missouri in the late 1940's. He joined the United States Air Force shortly thereafter and served for 4 years during the Korean War. Upon his return home he went back to General Motors and retired after 34 years.

He loved to play the guitar and mandolin and once formed a country music band, which entertained throughout the area for many years.

At an early age he accepted the Lord as his savior and joined the Fairview Baptist Church in Cross Timbers; he later joined the Blue Ridge Baptist Temple in Kansas City where he was still a member.

He was a loving husband, father and grandfather and will be missed by all who knew him.

Besides his parents, he was preceded in death by his sister Electa Owsley.

He is survived by his loving wife of 63 years June of the home; his daughter Glenda Hammond of Lee's Summit; his granddaughter Shawna Wishy and Andrew of Independence; one brother Audrey Pennell and Kathryn of Columbia, Missouri, other relatives and friends.

Memorial contributions are suggested to John Knox Village and may be sent in care of the funeral home.

Please click here to view the video tribute
To order memorial trees or send flowers to the family in memory of Glen Pennell, please visit our flower store.