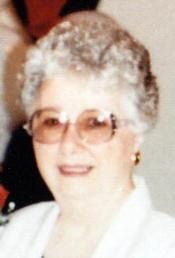 Grace Lucille VanKirk, 89, of Pleasant Hill, Missouri, was born Monday, November 12, 1923, in Milburn, Nebraska, the daughter of Harold and Letta (Borst) Hall. She departed this life at 6:40 a.m., Monday, January 14, 2013, at the Pleasant Hill Health and Rehabilitation Center.

She was a member of the Strasburg Baptist Church where she had been a Sunday School teacher and performed a clown ministry.

She was also preceded in death by her parents, two sons Charles Eugene VanKirk and Roger Dale VanKirk; one daughter Betty Joe VanKirk; one brother; and two sisters.

Visitation was held Wednesday evening at the funeral home.

To order memorial trees or send flowers to the family in memory of Grace VanKirk, please visit our flower store.