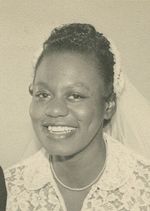 Helen was a homemaker.

Cremation has been accorded. A memorial service was held Saturday, January 23, 2010 at the funeral home. Inurnment will be held in Columbus, Ohio at a later date.

Please click here to view the video tribute
To order memorial trees or send flowers to the family in memory of Helen Graham, please visit our flower store.