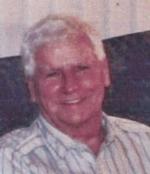 Horace Roy Storey, 81, of Pleasant Hill, formerly of Blue Springs, was born Saturday, October 5, 1929 in Majestic, Alabama, the son of Jack and Elmia M. (Ham) Storey . He departed this life at 2:41 p.m. on Thursday, February 3, 2011 at Benchmark Healthcare of Harrisonville, in Harrisonville, Missouri.

He was a Veteran of the United States Navy.

He was employed as a Baker for Manor, Holsom and A&P for over 20 years. Later he drove a truck for Orschelns, Transcon, and then P.I.E. retiring in June 1990. He was a member of the Assembly of God Church in Lee's Summit and a proud member of Teamsters Local #41.

Besides his parents, he was preceded in death by two brothers Harold Storey and Johnny Storey; and two sisters Sylvia Storey and Melva Chadwell.

Horace is survived by his wife Betty of Pleasant Hill; two sons David (and Virginia) Storey of Philadelphia, Pennsylvania, and Johnny (and Christy) Storey of LaCygne, Kansas; three daughters Marilyn (and Gary) Barr of Osage Beach, Missouri, Carol (and Richard) Tevis of Port Orange, Florida, and Susan (and Kenny) Long of Pleasant Hill, Missouri; 14 Grandchildren; 16 Great-Grandchildren; and his special friend Monica the Peek-A-Poo.

Cremation has been accorded. Memorial services were held Monday, February 7, 2011, at the funeral home. Reverend Jerry Tharp of the Lone Jack Baptist Church officiated. Full military honors were conducted by the Veteran's of Foreign Wars Post #3118 Honors team, at the funeral home.

Memorial contributions are suggested to Hospice Care of the Midwest and may be sent in care of the funeral home.

Please click here to view the video tribute
To order memorial trees or send flowers to the family in memory of Horace Storey, please visit our flower store.