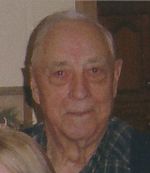 On September 25, 1938, he was united in marriage to Nadine Dill in Yates Center, Kansas

Howard was employed as an Inspector, Machine Tool and Gauge in the Trades department at Western Electric/Lucent in Lee's Summit, retiring in 1984. He and Nadine lived on their farm in Pleasant Hill for 41 years. He was a member of the Crossroads Baptist Church in Kingsville and the Telephone Pioneers of Western Electric.

Besides his parents, he was preceded in death by one son Michael D. Driskill, one brother Starl D. Driskill and a half -sister Irma Henry.

He is survived by his wife of 71 years Nadine of the home, two sons, Milford Driskill and Shirley of Neodesha, Kansas, Galen Driskill and Joy of Skiatook, Oklahoma; one daughter Carol Johnson and Chet of Lake Winnebago; one brother William C. Driskill of Lee's Summit; two sisters Lois Ruzicka and Ernie of Springfield, Missouri and Cleta Rush of El Dorado, Kansas; one sister-in-law Ardis Driskill of Liberty; 8 grandchildren; 8 great-grandchildren and one great-great grandchild; other relatives; and many friends.

Cremation has been accorded. A memorial service was held October 31, 2009, at the Crossroads Baptist Church in Kingsville; Pastor David Driskell minister of the church officiated. Musical selections were rendered by Mackenzie Driskill, David and Cathryn Driskell, and Gods Promise, a quartet from the church.

Inurnment will be in the Strasburg Cemetery at a later date.

Memorial contributions are suggested to the Crossroads Baptist Church building fund and may be sent in care of the funeral home.

Please click here to view the video tribute
To order memorial trees or send flowers to the family in memory of Howard Driskill, please visit our flower store.