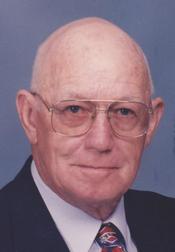 Howard was employed by Moore Construction Company, Pleasant Hill, Missouri where he built many homes and then went to work for Elliott Ottinger Construction, Kansas City, Missouri where he retired from in 1982. While he worked in construction for many years, Howard also enjoyed farming. He was an Army Air Force veteran of World War II and a 1938 graduate of the Pleasant Hill High School. Howard was a member of Jewel Lodge #480 A.F. & A.M in Pleasant Hill where he received his 50 year member pen in 2002 and over a 50 year member of the Carpenters Union. He served for 7 years on the Strasburg Water District and served several years on the Pleasant Hill Cemetery Board. Howard loved to hunt and fish and look forward to hosting his fish fry every year.

Besides his parents, he was preceded in death by his 1st wife, Maxine Moore in 1953; his 2nd wife, Lucille Moore in August of 1997; an infant daughter, Patricia Ann Moore in 1946; a brother, Robert Moore and a sister, Dorothy Raffurty.

Funeral services were held on Wednesday, July 6, 2011, at the funeral home. Interment was held in the Orient Cemetery, Harrisonville.

Visitation was held on Tuesday July 5, 2011, at the funeral home.

To order memorial trees or send flowers to the family in memory of Howard Moore, please visit our flower store.