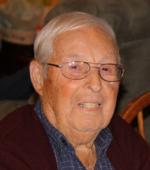 Jim proudly served his country as a WWII Army Air Corpsman serving in the European Theatre as an airplane and engine mechanic. He was awarded 5 bronze service stars during his military service. Following his time in the service, he went to work for General Motors in Kansas City. He later worked for The Ford Motor Company in Claycomo doing utility work on the assembly line for 25 years before retiring in 1972. Jim was a proud member of the United Auto Workers' Union.

Jim was strong and faithful in his devotion to Jesus Christ. He was baptized at Rock Falls Baptist Church in Orrick, Missouri. After moving to the Kansas City area, he became an active member of First Calvary Baptist Church in Kansas City where he served as a Deacon, head usher, and member for many years.

A loving husband who shared many sunsets, Coca-Colas and his love of gardening with his wife, Thelma at their family farm in Kearney, Missouri. Jim was a father who was always proud of his son in more ways than words could describe. A granddad you could count on for a hug and a kiss, or just to sit with his arm around you, enjoying his chocolate Andes mints, and telling you how great you were. He was a man who never met a stranger, and never left a friend without a solid handshake telling them how important they were. An avid fisherman and equally an avid fishing lure retriever, Jim enjoyed his time fishing with his son, grandson and great-grandchildren.

He was preceded in death by his parents and two brothers, Everett Brown of Kansas City, MO and Fred Brown of Beaver Dam, Kentucky.

Memorial contributions are suggested to the Pleasant Hill Lay Clergy Council and may be sent in care of the funeral home.

Please click here to view the video tribute
To order memorial trees or send flowers to the family in memory of James Brown, please visit our flower store.